TG A big part of NWN's success was its toolset, which players used to create their own adventures. What are its main new features?

CA Basically, we took a look at all the issues the community seemed to have about the first game, and decided to do the following things: first, we said, "OK, we recognise that people developing their own modules [campaigns] for NWN helped push that product far beyond where BioWare thought it would be." So we just tried to make sure the toolset had a lot more options. You can deform and shape the environment, you can spray down textures and you can modify the way water looks. Things like that. We've tried to make something that fans can play around with for the next two, three or even four years. 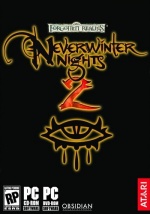